Enter your City name or Pincode

Nestled in the green foothills of the great Himalayan ridges and never-ending farms, Mukerian is a quite town situated in the north of Punjab . It depicts typical specimen of the quintessential rustic life of its people. From the vast expanses of the mustard fields to the huge Hydel power project in its neighborhood, Mukerian is the perfect place to be in to experience authentic Punjabi lifestyle. Living with the memories of protohistoric and historic civilisations, including the rich and brilliant heritage of the Indus Valley Civilisation, Mukerian has, throughout history, been at the centre of political and economic importance. 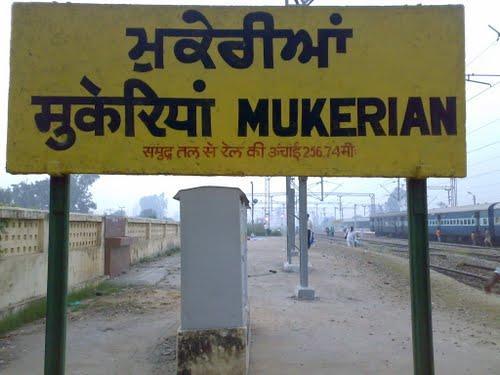 Located at 31.95°N and 75.62°E it lies at about 245 metres (803 feet) from the sea level. The district of Hoshiarpur in which Mukerian is a Tehsil, shares its boundaries with Kangra and Una districts of Himachal Pardesh in the north east, Jalandhar and Kapurthala districts in the south west and Gurdaspur district in the north west.

In the vicinity of the lush green foothils of the Himalayas, Mukerian is a beautiful city and is the largest Municipality in the Hoshiarpur District. The city of Mukerian has a Municipal Council and is divided in 15 wards for which elections are held every 5 years. The Council administers over 6,236 houses in its borders. The Municipal Council is also responsible for the development, tax and administrative affairs of the city. At the district level, the Deputy Commissioner is at the helm of the administration and performs the roles of Deputy Commissioner, District Collector and District Magistrate.

The town of Mukerian has its own place in the rich and diverse history of the Punjab. In 1595, the sixth Guru of the Sikhs; Guru Hargobind had visited Mukerian and raised an army to protect the Sikh religion from invaders and attackers. In his victory against the invaders, Mukerian and Hoshiarpur had played a key role. After Aurangzeb’s death in 1707, Punjab was divided in six Doabs, one of which was Jalandhar. In this Doab, Mukerian was one of the most important towns. The historical relevance was Mukerian does not stop here. In 1930, the fourth session of the Doaba Political Conference was held here to show a full support and solidarity to the Civil Disobedience Movement of Mahatma Gandhi. Punjabi is the main language of Mukerian, however, Hindi and English are also spoken here. Words from Punjabi, Hindi and Urdu intersperse with each other in the colloquial languages of the region.

Compared to the rest of the cities and villages in Punjab, the climate of Mukerian is quite temperate and moderate. Since it lies in the close vicinity of forests and hills, the climate here stays relatively cool throughout the year. Plus, because of the abundant check dams built under the Kandi Watershed Development Project, the surface water table has appreciably gone up. Because of the higher water content and the close proximity of wood cover, Mukerian is never too hot, except for a few days in Summer. Like the rest of India, Mukerian has three main seasons: Summer, Rains and Winter. The Summer usually starts in the month of April and lasts until the end of June, when it becomes hot and sultry. Although the weather stays relatively cooler, sometimes the mercury soars up to 45°C. Nights in the Summer are usually cool and pleasant. The monsoon arrives by the beginning of July and strengthens over a period of two months until it subsides by the end of September. Around 75% of the total rainfall occurs between July and September, whereas around 15% of the total rainfall is experienced in the winter months of January and February. Sometimes hailstorms may occur as the Winter comes to an end by the end of March. The winter catches by the beginning of October and sets in the months of December and January when the temperatures can be quite severe as the mercury usually drops to 5°C. Sometimes the weather gets more severe as the temperatures fall to 0°C.

As per the 2011 Census of India, out of the total population, about 9235 are employed in business and economic activity. The number of male employees is higher at 8008 while the number of women employed is 1227. Out of the total working population of the city, about 92.21% are engaged in main work, while 7.09% are marginal workers.

Although Mukerian is a Municipal Council, a large part of the Mukerian Taluk is covered by endless stretches of agriculture and forests. Major source of income for the farmers in the region are fruits. Fruits such as Kinnow, Mango, Peach,litchi, pear, Guava, etc. are grown alongside vegetables. Potato is grown on a large scale in the region along with peas, cauliflower, tomato, cabbage, brinjal etc. Under floriculture Marigold, Chrysanthemum and Goadieli are quite popular among the farmers.

Mukerian is a Taluk in the Hoshiarpur district that was once part of the thriving and scientifically advanced Indus Valley Civilisation. There is evidence from the Sivalik hills that this region was inhabited by pre and protohistoric people. Evidences of which are scattered in the district of Hoshiarpur. Apart from those, there are some more places of tourist interest in Mukerian.

Conceived in 1926 in British India, the construction for the Pong Dam began in the year of 1961 and was completed by 1974. Constructed on River Beas, the dam is 133 m (436 ft) tall and 1,951 m (6,401 ft) long, it is an earth-fill embankment dam. The dam has also created a lake called Maharana Pratap Sagar which is also a renowned bird sanctuary. The Maharana Pratap Sagar has a gross capacity of 69,47,812 acre ft of which 59,10,099 acre ft is live capacity. So far tourism is concerned, it is a good idea to carry that DSLR of yours with a long lens as this bird sanctuary is home to over 220 species of birds migrating from the plains of India, Central Asian Counties and Siberia. The migration of birds on their trans-Himalayan fly path has brought about a rich biodiversity in the lake area. Birds such as wagtails, sand larks and pipits, stone curlew, babblers, munias, kingfishers, bar-headed geese and ruddy shelduck are found with many other species. The best time to visit the Bird Sanctuary is the months of Winter when flocks of migratory birds visit this region. Although geographically it is in Himachal Pradesh, the distance to the Pong Dam is a mere 37km from the city of Mukerian. As the region is hilly, sometimes the traffic moves at a slow pace, so it is better to plan the day trip with plenty of time on hand.

At a short distance of about 22km from the city Mukerian is the famous temple of Lord Shiva of Kathgarh in Himachal Pradesh, which is famous for its natural Shiva Lingas. The temple is devoted to Lord Shiva and Goddess Paravti. Built interestingly in the Roman architectural style, the temple stands at the meeting point between two rivers – Choch and Beas. The temple houses two Shiva Lingas, which are 6' and 4’-7” in height and have octagonal base, representing Lord Shiva and Parvati respectively. Although it is close to Mukerian, it is best to take your own private vehicle or hire a taxi to plan a visit to the temple. Kathgarh is a small village and is close to the Mirthal village on the Pathankot – Jalandhar highway.

Since Mukerian is a relatively big town and is a perfect place for a spiritual and quiet sojourn. Here are some of the hotels where you could stay during your visit to Mukerian. Although there are not quite a lot of hotels to stay in Mukerian, you can find comfortable accommodation in the nearby towns as well.

Mukeria is a fairly advanced town in terms of public infrastructure, services and utilities. As a tourist or a visitor, you could take advantage of many services the town offers to its residents and visitors. Following are the details of some important utility services in Mukerian such as police, banks, hospitals, postal and courier services, etc.

As Mukerian is the largest Municipal Council in the district of Hoshiarpur, and it is also an agricultural market, a lot of economic activity and trade take place here. As the region is quite prosperous due to the fertile soil and thriving agriculture as well as small scale industry, a score of banks have opened branches in Mukerian.

Today, even in the age where seeing your loved ones is a matter of a mouse click or a video call from a mobile phone, the postal services have still retained their relevance and importance in our ever-changing country. Whether it job applications, letters to the loved ones or marriage invitations, the postal and courier services have remained important means of communication. Here are some postal and courier services you can avail in Mukerian.

No matter whether you travel in a petrol car, or a diesel car, knowing where you could refill the tank with the precious oil is imminent when you are going to drive into an unknown territory. To avoid getting stranded in the middle of nowhere with no fuel in your vehicle, it is better to know the addresses of the fuel station beforehand.

Mukerian is a land of agriculture, water and is surrounded by green pastures, hills and forests. No matter how clean the air is, or pure the water is, tourists are prone to falling sick if they are exposed to the sun, wind, cold and rains. To take care of minor ailments as well as serious injuries and unexpected health problems, the tourists can visit a number of hospitals in Mukerian. Following are the details of the healthcare services that you can avail.

The town of Mukerian lies to about 60km north of Hoshiarpur city and about 40km south to Pathankot. Getting to Mukerian is fairly easy as the National Highway 1A runs right through the town. Many buses ply daily between Mukerian and Hoshiarpur, Pathankot as well other nearby cities, towns and villages. There are state transport and private bus services that the tourist can avail in reasonable rates.Mukerian Railway Station (MEX) is well placed in terms of train connectivity. Many long distance trains such as Himsagar Express, Jhelum Express, Shalimar Express, Andaman Express, Malwa Express stop here. It is connected to major cities in the region such as Jalandhar, Amritsar, Ferozepur, Delhi as well as some important cities in the rest of India.

By Air Sri Guru Ram Dass Jee International Airport of Amritsar is the nearest airport. The airport has domestic and international flights and is only 109km from Mukerian. Taxi services can be arranged at the airport to reach Mukerian.


Mukerian at a glance

Comments / Discussion Board - About Mukerian